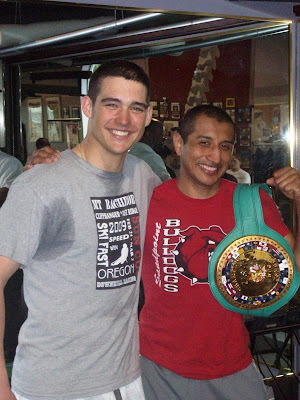 With only two weeks at home, Scott and I are staying pretty busy. The initial shock of seeing USST training requirements laid over his original summer plans is beginning to where off. I think he's accepted the price associated with being a full-time athlete.
Scott has a full plate right now, between catching-up on school, knocking the rust off baseball skills and working out several hours a day. In additon to his normal workout routine, he's been going to the gym at Pneumex with his trainer, Peter Faletto, two days per week. Training there gives him access to high tech devices and tech support. As an added bonus, Favio Medina (a pro boxer and championship contender) trains during the same sessions. The guys hit it off and it creates a good supportive environment for the longer workouts.
For my part, I'm busy working with sponsors and forming a non-profit foundation as a conduit for financial support. The new summer schedule also condenses the seasonal work around here and puts me in a crunch to get everything done. I'm trying to get most of next winter's wood in and complete our bulk wax orders before we leave next week.
This is a pretty big adjustment for me as well. Although I still play a significant oversight role in Scott's career, I'm no longer calling the shots. I now have to react to a schedule made by others. It'll work out.
The reality of being a full-time athlete is starting to sink in with Scott.
Posted by Shep Snow at 9:39 PM No comments:

So I came in the door two days ago and took the suitcase upstairs. I actually contemplated unpacking for the first time in seven months. However the following morning I received an e-mail for the US Ski Team with Scott's "off-season" schedule. We hit the road again May 9th for physical assessments followed by 12 days of skiing at Mammoth, CA. More in June and August followed by Chile in September. So much for unpacking...
Posted by Shep Snow at 10:47 PM No comments:

Sprint to the finish

Sorry for the lack of news. The past two weeks have been a blur, with ten starts in eleven days at two mountains. I had some trepidation about this trip. My concerns centered around possible fatigue, waning focus and the potential for soft snow. Scott insisted and, as it turns out, he was right. He scored in six of the ten races against elite fields.

We started at Mission Ridge, WA for two Super G, two Slalom and two Giant Slalom races. The field included eight US Team members, plus an array of team hopefuls trying to get those final points needed to meet US Team criteria. Scott had a little problem adjusting back to softer snow the first two races, then he regrouped and really threw down. He left Mission Ridge with improved point profiles and World rankings.

It was great being back home in the Northwest. We've been road warriors on the national circuit and haven't seen many of the kids with whom Scott came through the system. We have so many family and coaching staff friends here.

After the Mission Ridge series, we hopped in the car and drove to Mt Bachelor, OR for two elite downhills. The track was in great shape and they were able to start the races from the crater of the volcano (always a thrill). The Snow's have fond memories from this place. Both Bonnie and Scott have had great success here -- in fact, this is Bonnie's favorite race hill. It features numerous jumps and compressions. We also got to use the home of our dear friends the Beards, which also holds many special memories.

Scott pretty much owned the hill, cleanly winning the two downhill training races. Training races are required by the rules for downhill, with the course is set exactly as it would be for the real race. He then won the first official downhill by .65 seconds. Today, in the final race, he was edged out by .04 of a second by a US Ski Team member. In all, it was a very successful end to the year.

So now we hit the road home. First we have to swing through Twin Falls, ID to retrieve the Subaru with a replacement engine (January's casualty). Then I'll be hustling to fix everything that broke at the house over the winter.

Season of intrigue
Posted by Shep Snow at 5:37 PM No comments:

...with a little help from my friends.

We're in Wenatchee, WA for some training before the last tech race series. Our good friends, Matt and Katie Dolan offered us free lodging for the nine days w're here, which brings to mind all the great people who've helped us in many ways this season. This is an enormously expensive and exhausting journey, and so many folks have helped with donations, lodging, assistance and moral support. Thanks to you all.

The plan was for Scott to be off skis the entire time we were home, however a foot of fresh powder intervened and we had a great day at Schweitzer on Saturday. Unfortunately, towards the end of the day, powder, World Cup GS skis, a 360 aerial and DIN 16 bindings combined to tweek Scott's knee. Nothing serious -- just a strain that bore watching. We headed to Mission Ridge early for two days of training on the venue anyway.

Unfortunately, or fortunately, a spring storm cancelled yesterday's training, giving Scott another day to mend. It seems that did the trick as he is 100% this morning. We'll be training on a closed ski area, using snowmobiles for upward mobility. Should be fun!
Posted by Shep Snow at 7:30 AM No comments:

After a nice dinner and brief visit with Bonnie in Bozeman, we rolled into Idaho late Tuesday. It's so nice to be home after 49 days on the road. Unfortunately, we leave again Sunday for the final two weeks of competition. So these four days will be spent getting ahead on school, reworking all the skis and doing two sets of corporate taxes plus our personal taxes. I do love these rest periods!

Scott's left patellar tendon was pretty inflamed last week, so he won't be skiing this entire period. That'll give him seven days off snow, which should do the trick. We'll head to Mission Ridge two days early and let him tune-up there.
Posted by Shep Snow at 9:21 AM No comments: