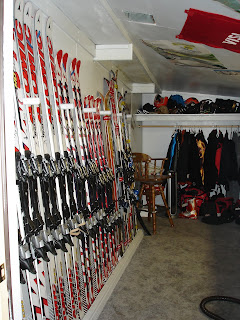 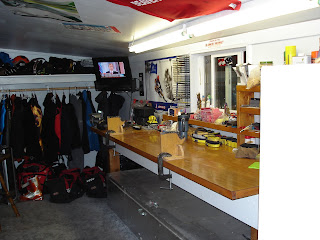 Ever wonder what racers and coaches do when they're off the road.... Relax? Sleep in? Catch a show? Not quite. See all those skis? Each of them has to be worked-up when they arrive, then waxed as many times as possible before seeing competition. Our goal is eight wax cycles (wax, scrape, brush) before touching the snow, with three of those being hot boxes. Four of these sets now have more than 15 cycles, the other four sets are at eight. Finish a set... start over. It's not as bad as it sounds -- check out our cool wax room. We built it last year beside the garage at road level. Easy in, easy out. We added music and a small flat screen to help the time go by. Five days until we're back on the road. 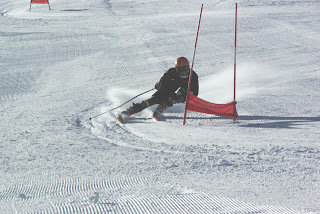 We closed out a successful trip to Europe with three days in France. Visited Chamonix, site of this winter's World Juniors, then took an excursion into rural France to get the Cadillac of gate keys from Jean Claude Dalloz. Finding him was an adventure in itself, but the prize was worth the effort! So now it's 11 days at home before a month of training in Colorado. See you then!
Posted by Shep Snow at 11:33 AM No comments:

Today was a real mixed bag. Scott woke up with the left knee still a little sore. He did a good warm-up in the valley, then did four warm-up runs, a course inspection, and four timed runs on the glacier. He skied really well -- he's pressuring the top of the turn and skiing the long line consistently now. However, after four full-on runs he decided it was time to quit. I agreed and raised him one by cancelling tomorrow's training. I figure it's smarter to take four total down days, then work back into strength training at home. We've accomplished everything we came here for, plus more.

So we'll be heading to Zurich early, which gives us another day to explore the French Alpes in a rental car. Should be fun! Next training will be in Colorado for the month of November. See you then.
Posted by Shep Snow at 12:04 PM No comments:

Mother's don't let your babies grow up to be...

Weight lifters! Scott only did two runs of Giant Slalom today because his left knee was hurting. Nothing new, it happens if he doesn't make an effort to warm up the leg. Why? Well, three years ago at Panorama, BC he went to the weight room with his cohort, Peter Hoffman. Some older racers were there working out, so Scott felt the need to "compete" as it were. He proudly came back to the room telling all the things he did, including leg extensions. I never recommend those to anyone due to the chance of injury. Anyway, both knees hurt that entire season. He has been slowly recovering from the abuse, the right knee is fine, but the left needs a little extra attention each morning.

Great dinner conversations tonight with Michel and Matt. Amazing the prespectives they bring to the sport with their experience at every level including the World Cup. Politics, personalities, training and management concepts -- I'm soaking it all up.
Posted by Shep Snow at 1:20 PM No comments:

On a day that promised high winds and questionable weather, we wound up with sunshine and great training until about 1PM. We set a 27 meter course shadowing the Austrians on our right. The course ran great and the athletes quickly adapted to GS after four days of slalom. Scott had a super day, working on pressure at the top of the turn. All 8 of his runs were within .3 seconds of each other. His final 5 runs in a fairly chopped course were within .13 seconds. He went home happy!

Just being here is a motivator. Watching these Swiss kids ski and work at their craft is impressive. They're focused and have really strong fundamentals. Heck, I've seen 40 kids here who would be Buddy Werner winners. So for an athlete like Scott it sends the clear message that he better work hard, because these Euro guys will be tough to beat. I suppose its like any sport; one needs to get out of the small pond and see what the other fish look like. This has been a very profitable trip by all measures.

Tonight the Masters attending the camp depart. I hate to see them go as they are a great group and it's good for the younger athletes to be around them. We have three days left on snow, one GS and two slalom. I have videos to post, but the internet is on super slow right now. Maybe tomorrow.
Posted by Shep Snow at 9:44 AM No comments:

I don't know if I can handle this. Even with suncreen, I've got raccoon eyes. It was colder today and the snow was really hard. We set a 58 gate slalom with three hairpins, one flush and a delay -- street legal in FIS terms. Scott has been working on patterning his line all week in both GS and Slalom. He's working on running the line long with initiation outside the corridor. He's got that down, but to accomodate the learning he hasn't really been putting the gas on. Today we told him to pressure the top of the line more and let it go. Wow, he picked up about a second per run. He only skied six runs today, but they were all flat out. So tomorrow we'll try to go to the same place with Giant Slalom. Should be fun.
Posted by Shep Snow at 7:13 AM No comments:

Why are we here? 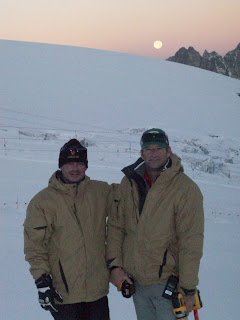 Hey, another great day of training in the sunshine! But today I'm going to talk about something else... what brought us to Zermatt

To answer the question, I have to go back a few years. We stopped skiing in the summer several seasons ago, defying conventional wisdom. I truly believe one sport makes an athlete better in another. Different movement patterns, less likelihood of muscle/joint damage from repetitive activities, and most importantly, no burn out. Also, you're only a boy once and baseball is a normal state of affairs! So we just operated on winter ski training until two years ago. That year Scott was invited to the Topolino Shootout, an assembly of the top 13-14 year old athletes to decided whom would represent the USA at the children's international ski championships in Italy. Scott and I conspired to form a plan for success and decided some intense pre-season training was needed. Now there just aren't a lot of places to go in November, so I did a web search and found Michel Pratte race camps. After reading the web site and conversing with Michel, we decided it was worth a try. That year Scott won the Topolino Shootout taking 5 of 6 races and represented the USA in Italy. That sold us on training in the Fall.

Fast forward to this year, our third working with Michel Pratte. Michel is a former World Cup tech racer for Canada. His cohort in crime is Matt Kerr, a former World Cup coach for Canada. Together they form a team with which Scott is very comfortable. What I like is that they don't chase cosmetics. They assess the issue and cut to the heart. So, for the past two years Scott has trained with these guys for two weeks in November. While he's training, I hang around helping with course maintenance and learning from the master coaches. It's been a successful formula. But this year we decided Scott needed four weeks on snow before joining the USST at Loveland Basin for training on injected (read ice) snow in late November. Michel had a two week camp planned in Zermatt, plus his normal two weeks at Copper Mountain, CO, so here we are.

A secondary reason for being here is to further acquaint Scott with survivng and travelling in Europe. It won't be long before he has to come here alone to compete, and I want him to be past the "Wow" factor.

If Scott's lucky, this may be his last year training with Michel and Matt (US Ski Team schedules conflict). However we are both richer for the knowledge gained and the good friendship with these great coaches.
Posted by Shep Snow at 11:36 AM No comments:

A productive day. Last night I had Scott view the retraction chapter on the USSA Slalom video. That, plus a little more time to get acquainted with his skis, paid dividends. Today he kept his feet grounded during transition which produced some pretty sweet runs. He now has his groove back and is looking forward to timed runs tomorrow.

I got to meet a legend while riding the tram one day this week. Coach Kostelic is the father of Janica and Ivica Kostelic and coached them all the way to the World Cup. Combined they have more than 50 WC wins plus several Olympic Medals. It's a great story about dedication and perseverence while coming up in Croatia during troubled times. They didn't have much money and lived in their car while travelling the circuit. They were even known to climb up into the engine rooms for the lifts after closing and sleep near the warm motors. He's still coaching Ivica and definately does things his own way. We had a great conversation. 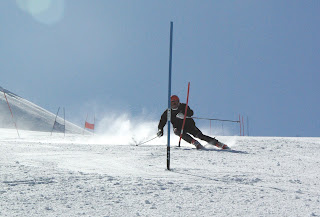 Well, I had to skip a day. I was toast yesterday and did some personal "maintenance" in the form of a nap! We wrapped up the first Giant Slalom session yesterday with a full-on timed course. Scott skied 8 runs through the course and I was pleased with his skiing for this time of year. What I liked best was his intensity. His final run, in a rutted course, was only .05 seconds off his fastest run. He wanted more but we folded it up.

Today was his first day on slalom for the year. He again was contending with the small sweet spot for his new gear (stiffer boots and skis). Tremendous power in the skis, but he sometimes had trouble keeping the feet grounded in transition. That's time lost. By the end of the day he was doing better. We'll watch the USSA Slalom coaching video tonight to reinforce the concept. They have a great section on retraction.

The head case. Technical ability is only part of the deal in sports. And the higher the level of competition, the bigger the role mental strength plays. Scott was disappointed in his skiing today (no one else was) and brooded all the way home. Now the "commute" home from the glacier consists of three T bar rides and three gondola rides. Takes 90 minutes. By the time we got off the T Bars, I couldn't handle it any more and checked out on my own. I can't stand negative thoughts. Scott got the message and caught up to me as I slogged up the hill back to the hotel. He's growing up and he'll do just fine.
Posted by Shep Snow at 8:42 AM 2 comments: