Scott was officially nominated to the 2011 US Alpine Ski Team on May 25th. It was a great day for him and our family and he basked in the hundreds of letters and generous words from friends and family. One thing that struck us all is how great it is to live in a small, close-knit, community. If we lived in a city, perhaps a few neighbors in each direction would be aware of Scott's career. However here in Sandpoint everyone knows and celebrates each other's successes. We can't walk down the street or in a store without someone coming up to talk. Really neat and old fashioned in a funny sort of way. Personal.

With Scott joining the team comes an intense schedule that chops the summer into pieces. They'll have him for a couple of weeks every month, then he'll head to Chile for the month of September. I'll travel with him (except to Chile due to expense) so my summer is similarly shuffled. That doesn't leave much time for work around the house, Scott's job, school or relaxing. We've both been going 90 mph since getting home.

Scott will be working with an excellent coaching staff. The head coach, Randy Pelkey, has a strong reputation and is also very organized. That's a huge thing in this business. My original plan had been just to travel with Scott and maintain a low profile, tuning his skis and supporting from a distance. Randy and I met for a while last week and he invited me to be on the hill and pitch in. I was totally taken aback, but jumped on the offer. This is better than I'd hoped. So, although I'm not an official member of the staff, I will be involved and be inside the venues for training and competition.

Now we confront the next major challenge -- funding. Joining the team does not mean free skiing. In fact, the team charges all "unfunded" athletes $22K per season for tuition. Scott will be unfunded for at least two years. Add to that the expense of me tagging along and we're looking at a big chunk of change. The search for grants and donations begins this week. This is my least favorite part of the business.
Posted by Shep Snow at 12:20 PM No comments:

This is one of the most boring weeks of my life. I'm intentionally staying completely off the snow and away from the USST training. I have several reasons. First, I don't want to create an issue with the staff that might impact Scott (although they offered me to be there). Second, Scott is one of only two athletes here who made criteria. the other invitees are in a try-out situation. I don't think it appropriate for an outsider to be there.

So instead, the highlight of each day is a 5 minute visit with Scott while I pick up his skis to tune them. I also get to work out each day, read some books and watch lots of movies.

Scott is enjoying the training. The team spend three days preparing the slopes with jumps and rollers for various drills. The coaches are showing him a technique to build more force at the top of the turn. Scott says he can feel the power and is "getting it." I'll probably sneak up there at the end of the week with some binoculars and see what's going on.
Posted by Shep Snow at 7:36 PM No comments:

The first day at school 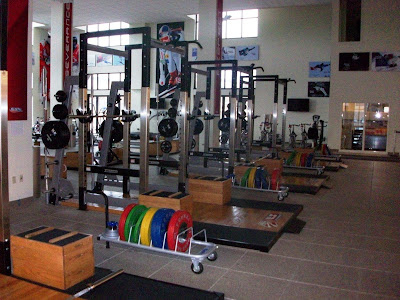 It starts today. I just dropped Scott off at the US Ski Team "Center of Excellence" for two days of physical assessments. It felt vaguely like the first day of school. He met the new Assistant Coach at the door, filled out some papers, then walked into his dream gym.

Scott is a gym rat. He's been working out since age 9 and builds a few hours of work into every day. I'm sure he'd happily put a bunk bed in here and live full time.

While Scott's working downstairs, I'll be upstairs in a two day "excellence" conference designed for program directors. It'll include insurance briefings, athlete development ideas, fund raising guidelines and other areas which might be useful to our team. As much as anything, its a convenient diversion while Scott is being tested.
The ride down here was as important as the event. I wrote him a "treatise" about the transition, and we had a long discussion about his career and what changes joining the US Ski Team might bring. Certainly there are some great advantages. He will be brought into excellent on and off snow training environments, many of which I could never create. He will also have a group of elite athletes with which to train, which is always a good thing (although he's made it this far with no "rabbits" to pull him). He'll have dedicated fitness, therapy and sports psychology staff at his disposal. He will have quality, experienced, on-snow coaches. He will also have a competition schedule carefully tailored to meet his development needs. That all sounds pretty special, except that it will be substantially different than what he had to this point..

The key word here is comprehensive. Over the past five years Scott trained in a fully integrated environment which encompassed fitness (diet, exercise and schedule), tactics and technical skills, mental strength and equipment management. Scott's success is due to his dedication, focus and hard work. However his rapid development is largely due to the program in which he trained. Two major points we discussed, and I"d outlined in the paper, were:

"Being different is one of the things which propelled you to this point. Remember, your competition isn’t XXXXX, XXXXX, XXXXX, XXXXX or XXXXX. In the end, your competition is some highly disciplined and dedicated Swiss or Austrian kid who lives and breathes his dream. Every day he’s working out 3-4 hours to get stronger. He tunes his own skis. He has highly competent coaches. He trains year around with a singular focus. He has full family support. He lives in a society where ski racers are Gods and everyone aspires to be one. You’ve watched the Swiss kids -- you know the deal. To beat them in 2014, you must work harder than them today. So don’t limit yourself to standards set for the group. Set your own performance goals, decide what needs to be done, and get after it. If others don’t understand, politely explain it to them. Offer them to join you. Lead the way."

"Joining the US Ski Team will be great for you. There are many experts in the organization with a lot to offer. You are at the point where you need their support. The problem with the Team is that the information is compartmentalized. The ski coach knows tactics and technical matters, but isn’t an expert in fitness, diet, sports psychology or equipment. The equipment guy knows all about edges and wax, but little about technique. The sports psychology guy knows lots about minds, but little about technique/tactics or equipment. None of them knows much about you. So you have to learn how to connect the dots. You have to take ownership of making your program comprehensive. That will be the difference between greatness and mediocrity."

I'm sure some would consider my words extreme and unfair to the US Ski Team. I admire the team and respect the staff, however I have little faith in large organizations. They do well for the majority, but often don't meet the specific needs of the individual. Scott is the youngest here and must learn to manage his own future.

The first day at school. He knows his ABC's, he's wearing clean clothes, he knows where to reach me if he needs me, he has lunch in his backpack. He'll do just fine... I remember the day.