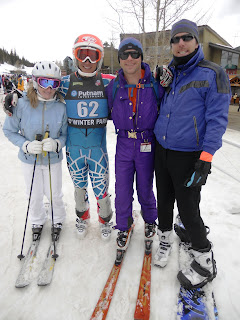 The US Alpine Championships were hosted by Winter Park, CO this year. Many of the athletes' families came to this event, which included banquets and socials in addition to competition. This was also the first time the entire US Alpine Team convened at the same race since December, making for a reunion type atmosphere. In addition to the US Team, numerous Division I NCAA atheletes plus a host of invitees from across the country competed, bringing the field to over 100 athletes in each gender. Despite all the fun and good will, this was intense competition for bragging rights.
Scott wasn't looking to make any noise in the tech events given his start numbers, but hoped for a good Super G result. He had a great run going until four gates from the finish where he was spit out of the course by a rut. Disappointing... The following day's Slalom he got a little salve for the wound moving from 66th start position to 2oth place in in a deeply rutted course.
We had lots of family come share the weekend. Scott's brother Jonathan (dressed in the retro Descent suit above) came to embarrass Scott with the help from some friends. Also, his cousin Eric came with the entire family. Scott invested some hours on the magic carpet and green slopes teaching his little cousins to ski. All in all it was a great trip.
Posted by Shep Snow at 8:47 PM