Scott ended the season on a perfect note -- speed! We 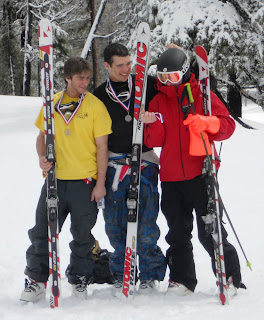 dashed straight to Mount Bachelor, Oregon after the Tech series for six days of speed including two Super G's and two Downhills. The Super G's were run on soft snow with gusty winds and rain -- sort of miserable. Fortunately the temps plummeted and the sun came out for the downhills, yielding rock hard snow and a safe, consistent, track.

Have I mentioned Scott loves downhill? He had blast on this fun track. Due to the ideal conditions the race started from inside the volcanic crater, through the notch, and down a track with plenty of bumps and turns. Scott knows this hill well, having raced it since he was 10 years old. The combo of fast skis and experience, plus the "homeboy" advantage allowed him to sweep the training run and both downhills.

Scott didn't have to come to this race, but he wanted to help with the penalty for the younger athletes. It's been a long season and logic argued for a rest before heading back into training in a few weeks, but I acquiesced given how much we used to hate it when seed racers didn't show-up at speed events. It all worked out well since the daily schedule allowed plenty of down time.

So we're now home at long last. Scott is catching up on school and back in the gym for a few hours per day. He also has some "close-out" maintenance to pull on his speed skis. I'm already engaged in repairing stuff that broke around here over the winter. Scott heads to Park City on May 8th for physical assessments followed by 10 days of Super G and Giant Slalom training in Oregon. It never ends!
Posted by Shep Snow at 10:29 PM