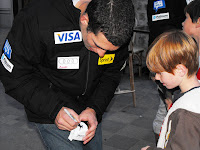 Vail welcomed the US Ski Team last night, hosting the official announcement of the 2010-2011 athletes at Arrabelle Square. Easily 1000 folks filled the cramped confines. The event was shown on Universal Sports TV and streamed live over the internet. After the ceremony the Olympians stayed at a table on stage to give autographs and the other athletes were released into the square. Scott got a 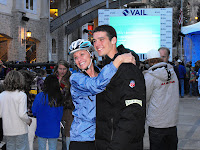 good dose of autograph hunters and middle age
ladies looking for hugs.
He's still being harrassed about the later.

After the crowd thinned, our good friends the Johns and I took Scott to dinner at Pepi Granshammer's Gasthof for schnitzel, one of his favorites. It was fitting to eat in the restaurant of a former Olympian and one of the original World Cup Racers.

This morning they hit the snow early, with slalom training at 7AM. This was Scott's first day back on injected snow and he skied well. There were some hiccups, but all in all he's right in there.

Injected snow isn't something the average skier encounters. The crews take a 4" pipe the width of the slope that has mini nozzles every 6" or so. They hook a snowmaker hose to the pipes and inject water directly into the snow surface to saturate. Then the water is turned off, and the pipe is moved 6" downhill -- repeat. It's a tedious and miserable process which is normally done at night, but it yields a rock hard surface for ski racing. The original reason for developing this procedure was to ensure a nearly identical surface for late numbered racers. To level the playing field, so to speak. However, if the big races are conducted on this surface, then the athletes must train on it as well. Interestingly, once an athlete learns to effectively carve on this surface, it becomes his/her favorite since it's predicable and holds edges well.
Posted by Shep Snow at 12:21 PM