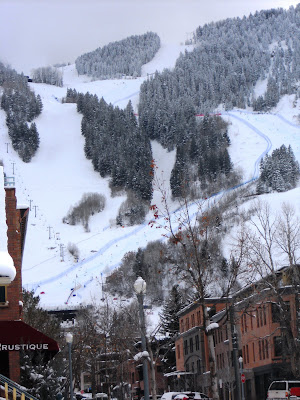 Sometimes it might sound as though Scott has made steady, uninterrupted, progress up the ladder of ski racing success. He has done well and is on a great trajectory, but the rungs on this ladder are getting further and further apart. Sometimes one has to leap for the next rung, get a fingerhold, and pull up. Sometimes one loses his grip. Scott has lost his grip three days in a row -- let me explain.

He's been training hard for weeks and feels ready for a breakthrough. In training he's running even with and often beating athletes with half his FIS point rank. He's primed for success. One problem though, this sport gets tougher at each interval and the only way to reach the top is to claw through seemingly unfair odds. When Scott runs even with the 20 point racers, they're all on roughly the same snow. Their first run is on smooth snow, and as the day wears on and ruts form, they all face the same ruts.

In races like the ones Scott's been in this week, the field is mighty "deep." The World Cup and Europa Cup guys, already infinately better than Scott, get to start in the top 30, on a relatively smooth course. The 20 point guys he trains with get to start in the 40's and 50's, and Scott is starting anywhere from position 70 to 90. But it's fair... every one of those guys ahead of him faced the same challenge and battled through. That's the ladder Scott now faces. He's handling it well mentally and just needs to keep grinding it out. I'm sure he will.
Posted by Shep Snow at 4:09 PM